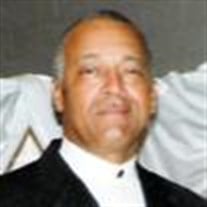 Charles Edward Lee, Sr. of Colerain, NC departed this life on Monday, October 5, 2020 at Rex Regional Hospital in Raleigh, NC. He was born on Dec. 28, 1950 to Ollie Bell Slade Lee and the late Eddie Nelson Lee in Hertford Co., NC. He was a... View Obituary & Service Information

The family of Charles Edward Lee Sr. created this Life Tributes page to make it easy to share your memories.

Send flowers to the Lee family.