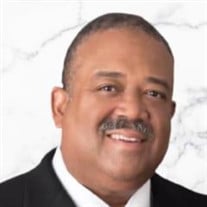 Obituary For Derrick Dupont Davis Derrick was born on October 8, 1965, to the Late DuPont Lafayette and Earline Powell Davis in Hertford County, NC. At an early age, Derrick accepted Jesus Christ as his personal savior at New Ahoskie Baptist Church, Ahoskie, NC. While attending high school, Derrick played football for the Ahoskie High School Cougars before graduating in 1983. He went on to study at the North Carolina Central University where he graduated Magna Cum Laude with a bachelor’s degree in Geography in 1988. He was forever an Eagle and proudly promoted NCCU whenever and wherever he had the chance. Eagle Pride! With a desire to advance his professional knowledge, Derrick attended graduate school at the University of South Carolina in Columbia, SC. It was there that he met a beautiful lady named Keisha Elliott who would become his wife. They were married on November 17, 1990, and began their life together in Winter Park, Florida. Derrick also started his career in Geographic Information Systems (GIS) at Breedlove, Dennis and Associates during that time. To their union, twins were born in 1993, Devin Jacoby and Dasha Lillian Davis became his entire world. Becoming a father was his greatest accomplishment. Longing to be closer to home, in 1994 Derrick moved his family to Greensboro, NC, and began his 28-year career with Guilford County as a GIS Analyst. He and his family also joined the East White Oak Missionary Baptist Church, where he served as a deacon for 25 years. Derrick was a lover of golf and played on Sunday afternoons and as much as the weather permitted. Besides golfing, football season was his favorite time of the year as he cheered on the Dallas Cowboys and Carolina Panthers. Friends and family would love to gather at Derrick’s home for a cookout and to enjoy his famous fried fish and chopped BBQ. Derrick had the gift of making everyone in his presence feel comfortable and laugh. Most importantly, Derrick was a man that held 3 main principles close to his heart – his faith in Jesus Christ, his love for family and his devotion to his friends. On March 1, 2022, Derrick went home to be with our Lord and Savior Jesus Christ. His loving memories will forever remain in the hearts of his wife, Keisha Elliott Davis; his children, Devin and Dasha; his mother, Earline Powell Davis; his brother, Dexter D. Davis; his sisters, Donica D. Thompson (Billy) and Dedria D. Davis-King; and a host of relatives and friends. Public Viewing Friday, March 4, 2022 7:00 p.m. – 9:00 p.m. Perry J. Brown Funeral Home 909 East Market Street Greensboro, NC 27401 Celebration of Life Saturday, March 5, 2022 11:00 a.m. Family Visitation 11:30 a.m. Service East White Oak Baptist Church 1815 Water Street Greensboro, NC 27405. Public Viewing in Ahoskie will be held on Sunday, March 6, 2022 from 11:00 AM - 1:00 PM at Hunter's Funeral Home, Inc. 123 Dr. MLK Jr. Drive N. Ahoskie, NC 27910. A private burial will follow at Davis Family Cemetery.

The family of Derrick DuPont Davis created this Life Tributes page to make it easy to share your memories.

Obituary For Derrick Dupont Davis
Derrick was born on October...

Send flowers to the Davis family.