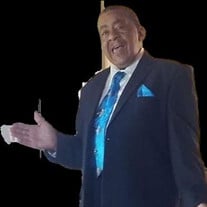 Donell Eason of Greenville, NC departed this life on Saturday, August 3, 2019 in Greenville, NC. He was born on August 5, 1943 to the late Leonard Eason and Addie Vinson Eason in Northampton County, NC. He was a Truck Driver. Donell leaves... View Obituary & Service Information

The family of Donell Eason created this Life Tributes page to make it easy to share your memories.

Donell Eason of Greenville, NC departed this life on Saturday,...

Send flowers to the Eason family.