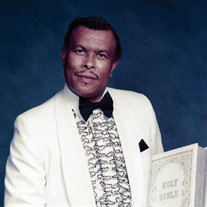 Isaac Holloman was born on August 1, 1931, in Hertford County in the small farmland town of Ahoskie, North Carolina (NC) to the late Margaret (Darden) Holloman and Whallon Holloman, Sr. He was called home to be with the Lord on Thursday, May 21, 2020. He is preceded in death by his mother Margaret, his father Whallon, Sr., his sisters Glennie Turner and Reva Bowser and his brothers Ernest “Buddy” and Whallon, Jr. “WJ” Holloman. He leaves to cherish fond memories, his wife Lucinda (Pierce) Holloman of Fair Oaks, California (CA), his two sons Isaac Hollomon, Jr. (Mercedes) of Fresno, CA and Benito Holloman (Cathy) of Citrus Heights, CA, three granddaughters Tara Naisbitt, Ashley Holloman and Kourtney Holloman, one great-grandson Marcus Naisbitt, one great-granddaughter Renee Campbell and two great-great-granddaughters Aliyah and London Naisbitt and a much beloved extended family and friends. Upon graduating from Robert L. Vann High School in Ahoskie, NC in 1951, Isaac moved to New York where he graduated from the Mergenthaler Linotype School on February 28, 1952. Yet, Isaac sought to carve out a life of opportunity for both himself and his wife Lucinda with whom he married on March 28, 1952. In building on his future, he could see no greater purpose than to serve his country and on December 29, 1952, he proudly joined the United States Air Force. In his service to our country, Isaac’s career would take him on a journey throughout the world to many places such as, Springfield, Massachusetts, Taiwan, England and even Vietnam. Finally, he and his family settled in California in 1968; often telling people that it was God’s Country. After over twenty years of service to his country, he was honorably discharged as a Technical Sergeant from Beale Air Force Base (AFB) on July 31, 1973. Yet, Isaac was not one to set limits for himself; instead he sought to pursue a higher education. On June 1, 1979, he graduated from Sacramento State University with a Bachelor’s Degree in Liberal Arts. He continued his career aspirations and went on to work for the Army Depot at McClellan AFB in Sacramento, CA as an electronic mechanic and retired in the early 2000s to enjoy his next chapter of life. At an early age, he joined St. John 2 nd Missionary Baptist Church in Ahoskie, NC. In his adult life he joined St. John Missionary Baptist in Sacramento, CA where he was called serve and received his Bachelor in Theology from Pacific Coast Bible College on May 24, 1985. He later served as Reverend to several Baptist churches in Sacramento, CA. While, Isaac served at St. Luke Missionary Baptist Church he was ordained as the Pastor of the Church. In his call to ministry, Isaac continued to act in service to his community through his television program God’s Family United and visiting nursing homes and hospitals to help comfort and spread the gospel. His hope was to aid anyone that may have been in need of prayer or was willingly to listen to him speak of his faith and love for God. He often would start a prayer or sermon with is favorite hymn “Amazing Grace” and sought out both truth and solace in one of his favorite scriptures Psalms 30:5, often reciting to others as a reminder and a constant comfort that “joy cometh in the morning.” He was nothing if not a family man and whether you were near or far he held you close to his heart. For over thirty years, he made it his mission to maintain his relationships with family and friends by traveling across country by car from California to North Carolina to visit them. He often found a sense of peace in his travels; believing that there was nothing like the open road. He was known to always dress his best and despite blistering heat, you would find him wearing a three piece suit; the look of absolute contentment from a man with gratitude for a life well lived. For those who knew him well, if asked to describe his life in one word, it would simply be “blessed.” Now, as we say goodbye to this beloved man of God, his story begins anew as Heaven’s gates open to lead him into eternity with our heavenly father. Home Going services for Pastor Isaac Holloman will be Monday, June 1, 2020 @ 4PM EST in Sacramento, CA. Services will be live streamed so family and friends can tune in. Here is the link: https://vimeo.com/event/42916

Isaac Holloman was born on August 1, 1931, in Hertford County in the small farmland town of Ahoskie, North Carolina (NC) to the late Margaret (Darden) Holloman and Whallon Holloman, Sr. He was called home to be with the Lord on Thursday, May... View Obituary & Service Information

The family of Pastor Isaac Holloman created this Life Tributes page to make it easy to share your memories.

Send flowers to the Holloman family.