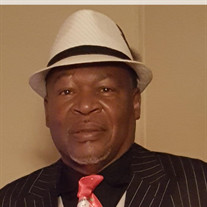 Kent Stewart Sessoms of Ahoskie, NC departed this life on Saturday, Nov. 23, 2019. A native of Hertford Co., NC he was born on June 20, 1954 to the late Morton Herman Sessoms and Doris Perry Sessoms. He leaves to cherish his memories: (2) daughters,... View Obituary & Service Information

The family of Kent Stewart Sessoms created this Life Tributes page to make it easy to share your memories.

Send flowers to the Sessoms family.