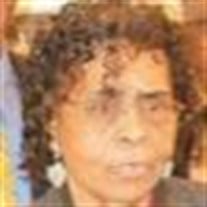 Rosa Marie Newsome of Murfreesboro, NC transitioned to her heavenly home on Friday, August 28, 2020 at Accordius Health and Creekside Rehab in Ahoskie, NC. She was born on February 22, 1940 in Northampton Co, NC to the late Johnnie Newsome and... View Obituary & Service Information

The family of Rosa Marie Newsome created this Life Tributes page to make it easy to share your memories.

Rosa Marie Newsome of Murfreesboro, NC transitioned to her heavenly...

Send flowers to the Newsome family.