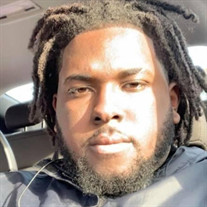 Tyriq Swain "Ty" of Ahoskie, NC departed this life on Monday, February 8, 2021. He was born on March 3, 2000 to Jessica Lee Freeman and Christopher Swain, Sr. in Hertford Co., NC. Tyriq was employed as a Forklift Driver for Cost Plus. Tyriq... View Obituary & Service Information

The family of Tyriq "Ty" Swain created this Life Tributes page to make it easy to share your memories.

Send flowers to the Swain family.